How can you successfully launch your most critical product before you have produced it?

Capacity Trucks had long been the number two terminal truck manufacturer in the country. Over the years, as competitors launched newer, more modern products, Capacity saw declining market share as well as eroding profits. Under new leadership, they committed to creating an all-new terminal truck from the ground up. This bold decision was full of challenges, since the truck was critical to the success and survival of the entire company.

Capacity used its engineering process to create a lighter, stronger, more ergonomic truck that would revolutionize their brand and market. To ensure the product was viable, it had to undergo rigorous testing, which meant final production would be delayed until all systems were a “go.” As the testing and refinement proceeded, the planning of the product launch needed to begin. To leverage the company’s investment in this new product, LABOV and Capacity agreed to re-launch the brand in conjunction with the product, saving considerable budget.

With a new brand identity, a new website, collateral and advertising, the brand and product—named Sabre by the employees—were launched to dealers. Because the Sabre truck had not yet been produced, 3-D renderings were created from CAD files. A LABOV Technical Immersion revealed numerous differentiators, ranging from serviceability to a leading warranty, which were also branded and promoted. The official launch began internally, by engaging employees at the factory, which was re-painted and branded in time for the first truck to roll off the line.

The Sabre terminal truck exceeded all sales and market share goals and re-established Capacity as the leader. The brand re-launch and product launch marked the first time the company had focused on its core values and differentiators in over 60 years. 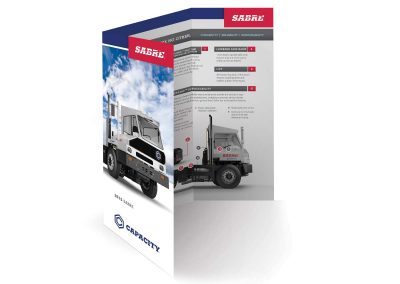 Are You Looking For Results Like This? Talk With Us.